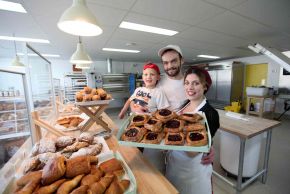 Joanne Toupin, co-owner of Sleepy Owl Bread, found out about SEED’s Business & Enterprise Support & Training (BEST) program from a friend who was accepted into the program in 2012.

“I was told about the program from a co-worker,” says Toupin. “I found out about what he was doing (in the program).”

Toupin and her husband Beau Burton had already started selling their artisanal breads at farmers’ markets, but found it difficult to keep up with the demand since they didn’t have a commercial kitchen, and the income they made wasn’t enough to support them leaving their day jobs.

They demystified that and helped us with our business plan


Toupin took SEED’s business training program in 2013/2014, and the couple opened the door of Sleepy Owl Breads at 715 Wall Street in October 2014.

“SEED helped to get a clear picture of what running a business is really like,” says Toupin. “They demystified that and helped us with our business plan.”

She says the program could help others make their business idea a reality.

“I would recommend it to the right type of person,” says Toupin. “Because it’s very rewarding.”