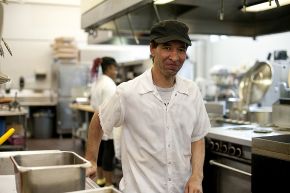 Diversity Food Services is an anomaly in the business world. Co-owned and co-founded in 2009 by the University of Winnipeg Community Renewal Corporation (UWCRC) and SEED Winnipeg, Ian Vickers, Diversity’s Chief Operating Officer, describes Diversity’s mandate as essentially to “be a leader in [food service] sustainability in North America.”

With the creative freedom given to him by the Diversity Board, also chaired by SEED Winnipeg and UWCRC staff, he has the ability to stretch that mandate to its limit.

Diversity’s mandate can be broken down into three key areas. First, it provides tasty, healthy, ethnically diverse, and reasonably priced food. Second, it commits to ethical hiring practices and extensive employee training. And third, it aims to be a responsible community member and seeks to increase the overall sustainability of the Winnipeg food chain. Essentially, the goal is to make good food, treat its employees well, and have a positive impact on its community.

“Part of the reason I love my job is I get a lot of latitude to […] figure out what those sustainable things are, at the same time there is an outlying framework. Our total marginalized employees can’t drop below 65 percent, and local procurement [of food] is expected to be somewhere in that same 60-65 number.”

Eight years on, Diversity has increased its physical presence. What started as a university food service has now expanded to a catering company and several off-site locations, including the year-round Buffalo Stone Café at FortWhyte Alive, and the Eagles Roost Café at Player’s Golf Course. With this expansion comes increased job security for Diversity’s 90 plus employees. Off-campus operations have grown enough that all of the staff who would traditionally be laid off in the summer season now get moved to other locations.

Good treatment of staff extends beyond hiring practices. For example, Diversity pays for each employee to complete the Safe Food Handling course, beyond the Provincial Government’s mandate requiring only one employee of the twenty in the cafeteria at any given time be certified. Staff are encouraged to take ownership of the food that is produced.

“We really gain as a company because our staff are the ones who develop our menu items, and our chefs go through and figure out how to make them in an institutional setting – how to scale it up into the kind of sizes we can do.” Diversity builds new menus for all its spaces every two weeks, to stay current with seasonally available produce.

Diversity has no shortage of connection to local farmers. Ian estimates that it buys from over 160 vendors. This is a staggering number, when compared to some university cafeterias that make a hundred times larger sales and typically carry six to twelve vendors.

Consequently, the food is always very fresh. “We’ve driven down our food waste. A typical restaurant is going to report its food waste at 8%, but ours got so low from constantly refreshing and bringing things in so frequently that we don’t even show it on our balance sheet” says Ian. “There’s no write-off to it anymore.”

This is only possible through Diversity’s direct connections with small suppliers. “I don’t actually target organic,” he says. “What we actually target is farmers who are doing good Earth stewardship practices who can’t get an organic certification.” He cites the example of a farmer whose field may have been sprayed twenty years ago with Roundup, yet whose sustainability practices are revitalizing the land.

In the same way Diversity doesn’t target organic farmers, it is not focused on becoming Fair Trade. “You have to carry at least two fair trade certified products [to be certified]. I carry at least seven.”

here I get to care


Diversity’s small size is part of what makes it successful. “Reverse economy of scale that kicks in – we can do more for [our food partners] because we’re smaller.” At a certain scale, fostering direct connections with small vendors becomes unfeasible. Combining its size with an open-minded, non-profit-driven Board makes for a winning recipe.

Their local community and partners benefit in ways that aren’t easily quantifiable. By composting on an institutional level at FortWhyte Alive, the compost company is able to offer residential collection in the surrounding area because of the guaranteed supply, consequently greening up the whole community.

Diversity’s open-ended contract with Fort Whyte’s pork operation guarantees its stock and buys any pork that FortWhyte cannot use or sell directly, allowing the farm to grow more pigs, risk-free. For Diversity, the difference is made up in a few extra ham sandwiches.

Another challenge relates back to shelf inventory. “It’s a cash flow liquidity question,” says Ian. Simply put, most of Diversity’s cash value comes from the food on its shelves, and that food comes in and then goes out very quickly. Unlike most food services providers, Diversity deals directly with farmers who cannot offer the flexible terms of a warehouse food distributor. “You need to pay farmers right away,” says Ian. Luckily, one thing students can be reliably counted on to do is eat.

So, what does it take to be like Diversity? First, they display a high tolerance for risk. Second, a willingness to pursue a management intensive approach. And third, be governed by an open-ended and flexible, ethical mandate.

Finally, employees like Ian Vickers are required. Employees who take independent ownership of the company mandate while functioning seamlessly as a member of the team. Employees who view their role within Diversity in the same way Diversity exists within the larger web of non-profits, everyone contributing what they can towards a more equitable, sustainable future.

Four years into working for Diversity, Ian is still amazed by the company and closes by saying, “here I get to care.”

« People in All Nations Want this Bread

Going There Over the Years, I Have Actually Learned to be More Outspoken and be More Out There »