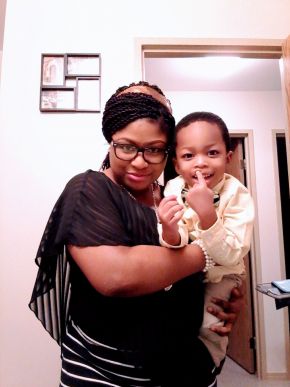 Bukky Omoruku’s journey towards achieving recognition for her Nigerian nursing credentials is a story of hardship and isolation, but also of resilience. She knows the terror of trying to do everything alone. She knows the value of seeking support at those critical moments, and she has felt the overwhelming relief of coming out on the other side of her challenges.

“The first two years were stressful,” she remembers. Bukky was in an abusive relationship when she arrived in Canada, and then she became pregnant. Although she experienced complications throughout her pregnancy, eventually Ethan was born.

Bukky’s situation quickly became untenable and she left her husband. She recalls her thought process at the time: “I have a baby, I’m going through this bad relationship that I just got out of. It wasn’t my choice to get out at the time, but I don’t have a regret that I left, because they were going to apprehend my son if I didn’t leave. They gave me a choice, but that wasn’t a choice for me – either you stay and we take your child from you, or you leave and we take you to the shelter.”

“I was in the shelter for three months. When I was in the shelter, I went to Manitoba Start,” Bukky recalls. She was referred to the Recognition Counts program at SEED, as well as the Bridging Program for Internationally Educated Nurses (BPIEN) at Red River College, and was accepted into both programs.

I know a bunch of people out there who have the potential to do well. They just need the support


Bukky received a loan of $2,600 through the Recognition Counts program, which covered the cost of her books, professional clothing, the purchase of a computer and association fees. Eighteen months later, Bukky wrote her BPIEN exam and passed with flying colours.

She found out she passed on her birthday and “it was the best birthday gift I ever had.” She received her first paycheque after four days of work, and it was more than she received in a month on EIA. She took that first paycheque and framed it: “I actually didn’t want to cash the cheque. I wanted to put the cheque in a frame and when I get up in the morning I could be looking at it – but I have to cash it, it’s still money. I photocopied the pay slip and put it in a frame in my bedroom. I look at it every morning.”

“The person who I was in Nigeria carried me through this hardship here […] The lesson I want people to learn from this is nobody should ever look down on someone. I know a bunch of people out there who have the potential to do well. They just need the support.”

“I was able to move on, and that’s it, I’m happy now. I’m a registered nurse and I’m not only going to stay as a registered nurse. Last week I was at University of Manitoba because I want to get my BA and if possible, I would love to be a nurse practitioner.”

« Going There Over the Years, I Have Actually Learned to be More Outspoken and be More Out There