SEED Does a Lot of Work with Me, a Lot of Stuff that I Wouldn’t Know How to Do on my Own 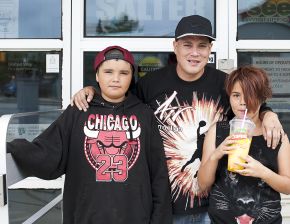 Roger Lavallee’s success story is one of progress. He has shown great resilience in the face of long-term adversity, and he is unwaveringly devoted to his children.

Gaining literacy about financial supports has been an important step. “I didn’t know what a food bank was […] A friend referred me [to SEED] and it didn’t take long: we did my taxes right away, and then I needed child tax, which was even harder. I had to get the kids on my budget, I was on my own budget for like eight months; we were living off two to three hundred dollars [per month in addition to rent].”

Systemic challenges can turn seemingly simple tasks into nightmare situations. When the mother of Roger’s children passed away suddenly, he became their full-time custodian, but obtaining legal guardianship evolved into a year-long struggle, because his name does not appear on their birth records.

If I’m down, SEED will pick me up.


He provided documentation to prove he is their father, but not enough to get his name on their birth certificate. Now, with SEED’s referral to the Public Interest Law Centre, it’s looking like this issue may soon be resolved. However, Roger notes that it’s not always a straight path forward. “I’ve hit rock bottom so many times – SEED does a lot of work for me, a lot of stuff that I wouldn’t know how to do on my own.” Nonetheless, he’s made personal progress, like learning to better cope with his anxiety. He does things now as a father that he wouldn’t have seen himself doing before. “I can actually talk to people, I’m not as worried as I used to be.”

“When I came in to SEED I was a scared little puppy. When I first came here I didn’t know what to expect, I didn’t know if I was going to get the help I needed, but [my Program Coordinator], Aileen Krush, showed I was pretty much welcome to bring my kids in the first time because, like I said, I couldn’t leave them alone.”

And his relationship with the kids keeps getting better. “It’s awesome. We’re really close, we’re a really close family.” He smiles when he looks at them, “I still call them my babies even though they’re not babies anymore.” He says the youngest likes it, but the eldest gives him a hard time about it sometimes. “They’re my heart and soul.”

“We’ve been through tough times […] I still think I’ve got about a year’s worth of challenges ahead of me” says Roger, looking back and looking ahead. “But”, he says, “I’m resting a lot easier since I found SEED. If I’m down, SEED will pick me up. I know they’ve got my back […] I think we will be fine; I’m confident, I’m not too sad anymore, and I know my goals will be met.”

« It’s a Great Life Skill. Now He Knows He Can Do it for Other Things