Grounding Aboriginal Youth in the Lessons of their Elders 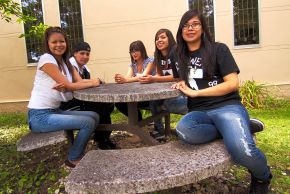 In December 2011, 14 COTE high school students from grades 9 – 12 graduated from this innovative program.

Money Stories: Grounding Aboriginal Youth in the Lessons of their Elders was launched in 2011, the result of a successful partnership between SEED, Children of the Earth High School (COTE) and the Aboriginal Seniors Resource Centre.

Central to the Money Stories project was the development and delivery of a customized money management training program for Aboriginal youth, grounded in traditional Elder stories. In December 2011, 14 COTE high school students from grades 9 – 12 graduated from this innovative program, co-facilitated by SEED’s Cross Programs Team and community Elders.

JACKIE DOLYNCHUK, COTE’s Community Support Worker, contracted with SEED for the summer months and is excited about the program’s potential impact on Aboriginal youth. “Many of our youth come
from extreme poverty where government agencies and workers control how money is handled. This program provides students with skills they or their families have not been exposed to in the past. Money Stories, with Elder Teachings, presents the idea of a financially secure future – something many of the youth have not even considered.”

LIZ ESQUEGA is the Aboriginal Community Collaborations Coordinator at SEED and feels that the guidance and wisdom of the elders and the willingness of COTE youth to learn are two keys to success in
this partnership. Elder Lucy Guiboche shared stories she received from her parents and grandparents about stewardship of resources, and feels a sense of responsibility to encourage the next generation. “We [Elders] need to help the next generation out of poverty. Young people have gifts and talents that should be used. I believe that preparing them for the future, one day they’ll go out into society with the experience and confidence to know they can make it.”

Money Stories, with Elder Teachings, presents the idea of a financially secure future – something many of the youth have not even considered.

Due to the success of the pilot, Money Stories Phase II was launched in summer 2012 to include an enhanced curriculum and the addition of five Junior Facilitators, all graduates of the pilot program. Throughout the summer, training teams that included Elders, Junior facilitators, and SEED facilitators visited organizations like Neeginan Institute of Applied Technology and Wii Chiiwaakanak to deliver workshops on a variety of topics that included budgeting, record-keeping, community economic development, credit, banking and more.