A day not soon forgotten 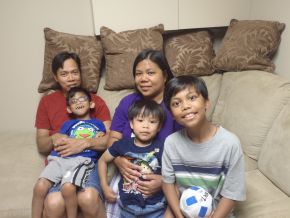 Shortly after arriving in Canada, Joseann and her husband Norberto received the difficult news that their middle son had been diagnosed with cerebral palsy.

Joseann was not able to work outside the home, and the rent on their current home was about to go up substantially.

On that day, six years and three months after leaving the Philippines, the couple and their three boys received the keys to their brand-new, fully-accessible, Habitat for Humanity home.
Habitat for Humanity works to build safe, decent, affordable housing for low-income working families.

Owning a new home is an opportunity to put down roots and build a sense of belonging in a community.

But the additional costs, such as house insurance, regular maintenance and the full cost of utilities can be a shock for many.

SEED gave us the tools we needed.


To ensure their homeowners are ready for these changes, Habitat has partnered with SEED Winnipeg to provide money management training to families in their home ownership program.
Habitat homeowners learn the importance of budgeting, the differences between renting and home ownership, how to distinguish between needs and wants, and the dangers of payday lenders.
“SEED gave us the tools we needed,” says Joseann.

Joseann especially enjoyed the session on being a good neighbour. “Some of the people in our block were in the training with us,” she says. “Living closely together on a diverse block, the session was important for all of us.”

Brenda Friesen is Habitat’s Manager of Family Selection & Support and sat in on some of the sessions.

“It felt great seeing how the participants interacted and engaged with each other. They’re going to make it. They’re energized and learning from each other,” she explains. “They realize they have skills and knowledge they can share. This is where I see real growth.”