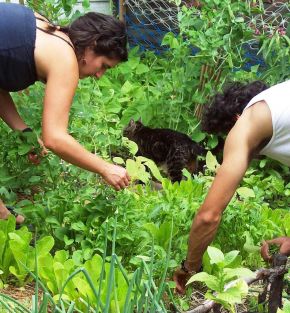 Paolo Riva and Naomi Audia are two of the four founders of Urban Eatin’ Gardeners Co-op, a group of food growers and educators who grow edible things and help others do the same. They offer a variety of services to help develop your yard into a paradise of organic herbs, vegetables and fruit.

The Urban Eatin’ founders were part of SEED’s Community and Worker Ownership Program (CWOP), which provides assistance to small groups interested in starting or expanding a cooperative business.

“We opened up a bank account after the first meeting. We knew where we were going. We met once or twice per week for the first couple of months and looked at who is skilled in this and who can do that. We opened up last spring and incorporated in October 2009,” Audia says.

Audia was impressed with SEED’s classroom work, saying that some of the exercises helped to humanize the world. “The bureaucracy forgets that we’re all human beings and we’ve all had hardships in life. SEED is a lot more personable.”

Urban Eatin’s main clients so far have been young families and women mostly in the city centre, Riva says, and the reaction to their unique services has been extremely supportive. “We work with what’s going on in their yards. Improvising and being resourceful is a big part of it,” adds Audia.

The bureaucracy forgets that we’re all human beings and we’ve all had hardships in life. SEED is a lot more personable.

Their busy season is from April to October but they’re looking at expanding to indoor gardening and greenhouses in the future.

In addition to SEED’s business development program, Urban Eatin’ was also able to take part in a matched savings program developed especially for community owned and cooperative businesses. This IDA (Individual Development Account) program enabled the group to collectively save for many of the items that the business needed, with their savings matched 3:1 by SEED. “Being involved in the IDA program relieved a lot of stress from our shoulders. We were able to make plans that involved items we didn’t quite own without worrying how we would afford them,” Audia says.

Together, the group made decisions around how the money would be spent. Some of the items on their shopping list included education, hand tools, and a greenhouse.

“SEED has offered total support in terms of education and legal issues,” Riva says. “They’re incredible, they’re so supportive. Everybody at SEED has been trying to help us. I feel like they’ve been bending over backwards for us,” adds Audia.

« The Art of Business

Diversity Foods - A Model of Sustainability »